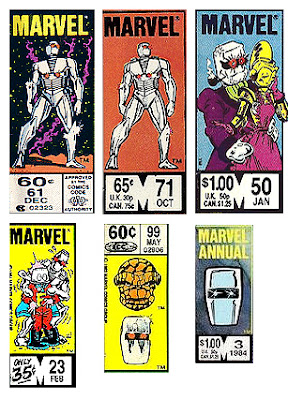 Most of you will recognize the corner art at the top left as being some what iconic image of the 80s Marvel and a regular for the Rom spaceknight series. The star field back ground's color scheme usually changed from issue to issue. At issue 65 the corner art changed to having a flat color fill back ground as seen in the example right next to the original. Although here too the color scheme would change from issue to issue.
But some Rom issues did deviate from this corner design regiment. Rom issue 49, 63 and 66 actually had their corner design with a back ground fill that was that of the actual cover art scene: http://www.coverbrowser.com/covers/rom-spaceknight  Aside from that there were two other unique ones. Rom # 50 featured corner art that was reflective of a tongue n cheek back story about Rom and Starshine as a stereo typical American couple from the suburbs and Rom Annual #3 featured simply a head shot. To the best of my knowledge the only two Marvel titles outside of the series to ever feature Rom in the corner art was Marvel Two in One #99 and Marvel Age #23. To see fan made ones: http://corneredblog.blogspot.com/search?q=rom+spaceknight 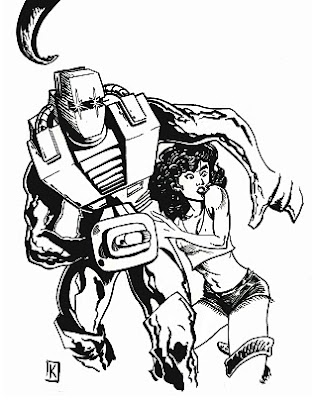 And here we have some fan art from a fellow by the name of Kimo Yancy who has a blog full of sketch art. The top piece with presumably Brandy Clark evidently was his first posting ever. At the bottom it appears as if we have a reinterpretation of the opening scene from Rom #1 The Arrival. Good job on these Kimo if you're reading this.


Well it appears as if there may be something that makes the SyFy channel worth watching again cause God knows I haven't had any reason to for the last 15 years or so. Special thanks to Gary Martin Jr. for giving me a heads up on this. Not too many chicks where I live who like sci-fi & comics look much like the host on this show  http://www.youtube.com/watch?v=DZJJ-yLTuVA


Did you know Shogun Warriors #13 was one of my very first comics ever even before I ever had any Rom issues? Just like with The Micronauts it was a toy line I really was into back in the day. Like the guy featured in that Collector's Intervention episode I was really into all sorts of robots too at the tail end of the 70s and through out the 80s.
It started with Shogun Warriors and The Micronauts but later I would find myself really into The Transformers, Voltron and Robotech as well. I actually used to have the Voltron robot on the left hand side of the bottom shelf. The robot just above him was one that a friend of my had it was kinda cool it separates into 3 different vehicles.

In just a few days we'll look at some promotional Rom art work that was never published.
Posted by Shlomo Ben Hungstien at 12:00 AM