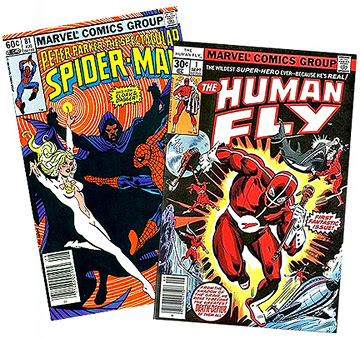 Here's a couple of other issues that were part of my recent $1 bin loot. I actually used to have the Human Fly #1 back when I was around 12 or 13 as it was part of the numerous late 70s comic titles that were easily available in what used to be the 3 for $1 boxes found at comic shops. At the time I had no real idea who Bill Mantlo was nor did I know he had anything to do with this character. But more importantly I was too young to understand what the Human Fly was really about which I certainly do now that I've had a chance to thoroughly read it from cover to cover.
The Human Fly himself was guy who lost his family and badly injured in terrible car accident and had to have 60% of his bones replaced by metal. In the flash back sequences of the his origins during his rehabilitation and of how he recruited his team they show him with his face in bandages the whole time implying that he was disfigured some how. His team members consist of a commercial airplane co-pilot who happens to be a black woman (pretty forward thinking for 1977) by the the name of Blaze Kendall who is suffering from some serious confidence issues due to an emergency situation she had to take over while in the air. The other is former army engineer Ted Locke who lost his hands in Vietnam. So ultimately The Human Fly is not about being a super hero per se, it's about over coming disabilities of the mind, body and spirit and in doing so making a difference to others in the world.
Some pretty inspirational stuff a real tribute to not just what kind of writer Bill Mantlo was but also about what kind of person he is. That's why it was something of a shock to me when I came across this editorial page that included this opening sentence.

It kinda creeps me out how prophetic this ended up being considering what's going on today which I don't need to get into. I'm really glad thanks to the benefit auctions and in general to the fans who've shown over the years how much Bill is missed that something has been given back to him for all he's done for us. More clip art from the issue can been found here: http://www.supermegamonkey.net/chronocomic/entries/human_fly_1.shtml

Also written by Bill Mantlo, Spectacular Spider Man #81 featured his own creations Cloak & Dagger. In this issue we see a convergence of the vigilante duo, Spiderman and the Punisher in the mean streets of New York's drug wars. With Cloak & Dagger we again see the theme of social issues like street crime, drugs and the question of ethics in crime and punishment. You can see clip art from the issue here: http://www.supermegamonkey.net/chronocomic/entries/peter_parker_the_spectacular_s_19.shtml

And on a side note this isn't from a one $1 bin but I recently learned that The Last Starfighter movie comic adaptation was written by Bill Mantlo. The three issue mini-series was also in the form of a Marvel comic magazine which I used to have. It's turning out that there's more and more stuff I'm discovering was written by Mantlo that I used to have. As to the Last Star Fighter (1984) this was a good adaptation on what was a pretty good movie that still holds up fairly well today. And it was something of a first of it's kind with having been only the second movie to extensively use computer generated special effect. The first of course was TRON (1982) I say both movies when they debuted at the theaters.

Also the Swords of the Swashbucklers first appeared in Marvel Graphic Novel #14. Epic Comics, a division of Marvel Comics, began publishing it as an ongoing title in 1985. Created by Bill Mantlo and Jackson Guice, it could perhaps best be described as Treasure Island meets Star Wars.
Swords of the Swashbucklers is set in an alternate dimension to Earth in which the inhabitants resemble Earth’s pirates of old. A powerful, evil race of aliens known as the Colonizers controls the dimension while rebel “Swashbucklers” rob and pillage their oppressors so that they might survive. In one battle, The Admiral of the Colonizers’ armada, J’Rel discovers Earth and kidnaps two of the Swashbuckler’s leader’s descendants. The couple’s daughter, Domino, finds the Swashbucklers and agrees to use her unique powers to fight the Colonizers if the Swashbucklers help her rescue her parents. The series chronicles the war between the two races. A more comprehensive synopsis can be read here: http://www.comicsreview.co.uk/nowreadthis/2011/11/21/swords-of-the-swashbucklers-marvel-graphic-novel-14/

Coming up next we go Easter egg hunting.
Posted by Shlomo Ben Hungstien at 1:00 AM